Game Recap: Commanders 32, Eagles 21 : The Eagles had plenty of opportunities, but on Monday night, they were doomed by four turnovers in a 32-21 loss to the Washington Commanders. The Eagles are 8-1 and their lead in the NFC East is narrowed to just one game. Meanwhile, the Commanders remain in the thick of the hunt with a 5-5 record. As the Commanders forced four turnovers, the Washington offense controlled the game with the rushing attack, maintaining possession for 40:24 and converting 12 third-down situations.

Quarterback Jalen Hurts completed 17 of 26 pass attempts for 175 yards with two touchdowns, an interception, and a 94.2 passer rating. Hurts also had a rushing touchdown in the first quarter. Running back Miles Sanders gained 54 yards on 12 carries. Wide receiver Quez Watkins had 80 yards receiving, but on a 50-yard reception lost a critical fumble in the fourth quarter.

• The defense was on the verge of a three-and-out, but safety Reed Blankenship drilled punter Tress Way on fourth down and was called for roughing the punter. It didn't help the Commanders. On the very next play, defensive end Josh Sweat stripped the ball from quarterback Taylor Heinicke and it was recovered by defensive tackle Marlon Tuipulotu at Washington's 18-yard line. 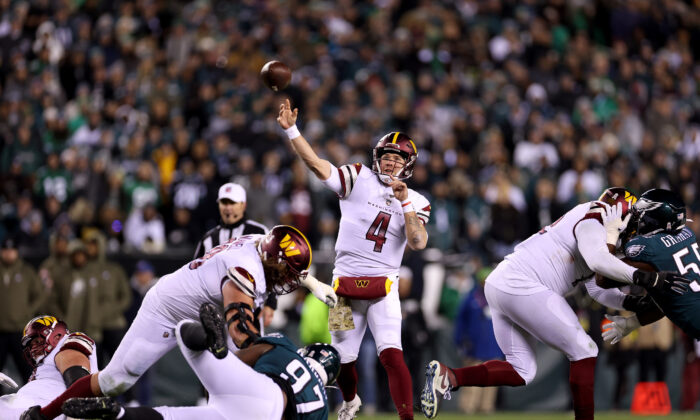 • The Eagles capitalized quickly on the turnover with three straight rushing plays to get into the end zone. Quarterback Jalen Hurts gained 12 yards on a designed QB keeper then, two plays later, snuck the ball in from 1 yard out for the game's opening points to make it 7-0 with 12:21 left in the first quarter.

• The Commanders responded with a 13-play, 75-yard touchdown drive that ended with a 1-yard scoring run by Antonio Gibson. Washington converted three third-down situations, the last of them was a 26-yard pass from Heinicke to wide receiver Terry McLaurin on a crossing route. It's 7-7 with five minutes remaining in the first quarter. • Two drives, two touchdowns for the Eagles. Hurts was threading short darts to move the chains with passes to A.J. Brown, Jack Stoll, and Zach Pascal. But it was DeVonta Smith who made the two key plays of the drive. Smith converted a 3rd-and-10 with a wide receiver screen to get the ball to the Washington 33-yard line. Then, Smtih drew a pass interference penalty on Benjamin St-Juste to move the ball to the 6-yard line. Hurts finished the drive by faking a QB draw and throwing to tight end Dallas Goedert over the middle to make it 14-7 with 1:30 left in the first quarter.

• The Commanders cut into the Eagles' lead with a 44-yard Joey Slye field goal, but not after a bizarre turn of events. On 3rd-and-1 from the Eagles' 22, running back Brian Robinson Jr. was stuffed by defensive end Brandon Graham and linebacker T.J. Edwards. On 4th-and-1, the Commanders appeared to go for it, even snapping the ball to wide receiver Curtis Samuel, who was crossing the formation, but Washington was called for a delay of game penalty.

• Hurts throws his third interception of the season. Going deep for Brown, who was in double coverage, safety Darrick Forrest picked off the pass at the Washington 14-yard line. Replay showed that the ball was perfectly placed in Brown's arms, but Forrest took it out.

Sweat was back on the field for the Eagles, but the Commanders capitalized with a touchdown drive to take a 17-14 lead. Washington went 86 yards in 16 plays, capped off by a Robinson 1-yard touchdown run. Washington converted three third downs and a fourth down when Samuel took a handoff on a jet sweep for a 1-yard gain. The Commanders are 8-of-11 on third down and 1-for-1 on fourth down. Eagles will get the ball back with 1:39 left in the first half. Washington leads the time of possession battle 22:43 to 5:38.

• Eagles quickly go three and out on offense. Kenneth Gainwell dropped the ball on first down, came up with a catch along the left sideline for 5 yards on second down, and on third down, Hurts' pass to Brown was incomplete as the wide receiver slipped.