3 University of Virginia football players killed in shooting; hundreds mourn on campus Monday night : The University of Virginia lifted a campuswide lockdown Monday hours after three students were killed and two injured in a shooting rampage on a charter bus that had returned from a field trip, authorities said.

Killed were D’Sean Perry, Lavel Davis Jr. and Devin Chandler, all of whom played football at the school, university president Jim Ryan said. The names of the two people who were wounded have not been released. "This is a sad, shocking and tragic day for our UVA community," Ryan said at a news briefing Monday, adding that authorities did not have a “full understanding” of the circumstances surrounding the shooting.

The suspected shooter, Christopher Darnell Jones Jr., is a former UVA football player, though he didn't appear in any games. He was arrested just before 11 a.m. Monday in Henrico County, about 75 miles southeast of Charlottesville, Henrico Police said in a statement. Ryan said Jones, 22, is a student at the 22,000-student school.

The shooting prompted a universitywide shelter-in-place order that lasted about 12 hours. University Police Chief Timothy Longo received word that Jones was in custody during the briefing. 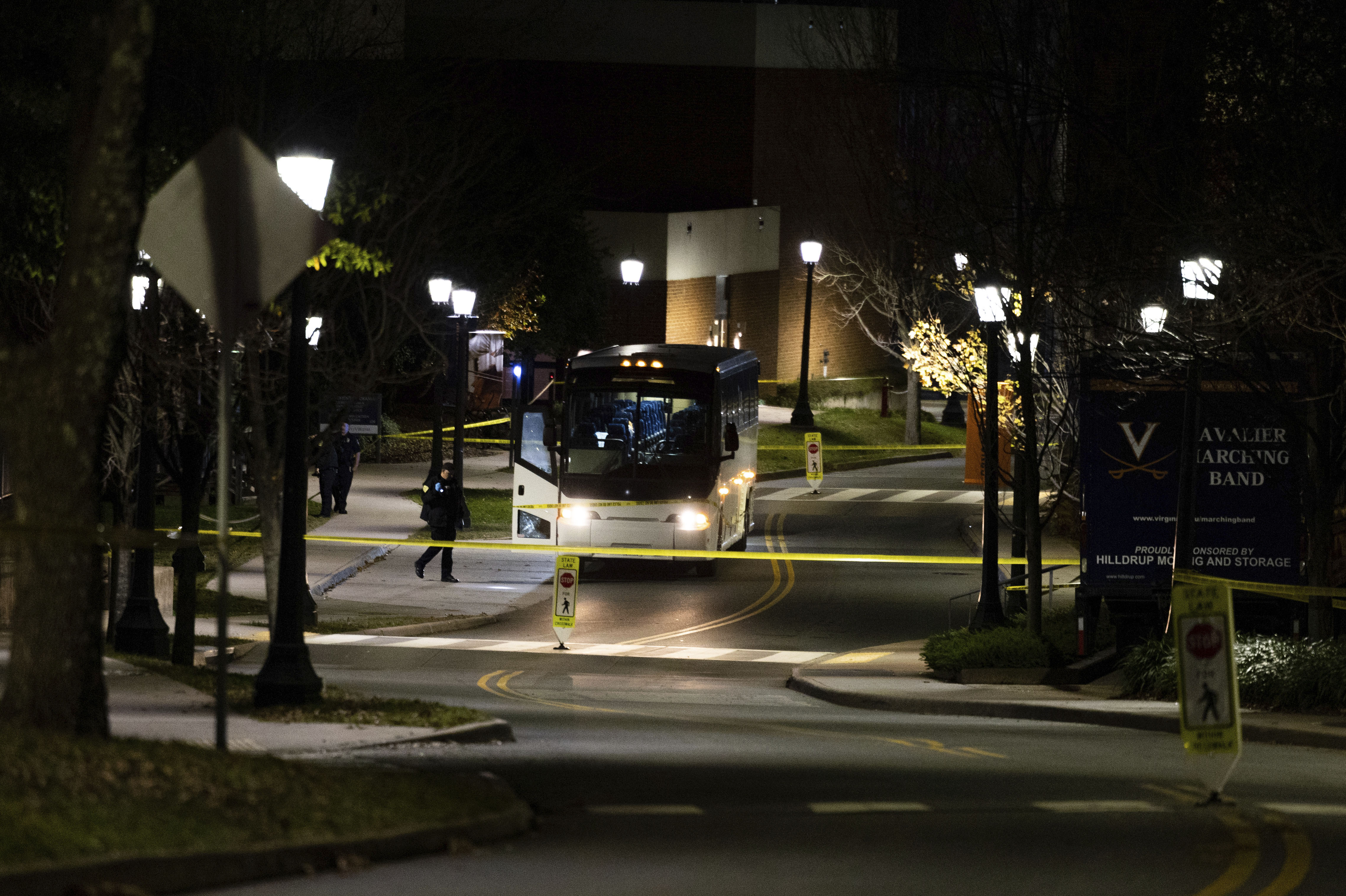 “Just give me a moment to thank God, breathe a sigh of relief,” Longo said.

Details of the arrest were not immediately released.

Longo said a shooting was reported at about 10:30 p.m. Sunday on the northern edge of campus. The school immediately sent an alert to students: "ACTIVE ATTACKER firearm reported in area of Culbreth Road. RUN HIDE FIGHT."

Ryan said counseling and psychological services would be made available to students. Classes were canceled Monday and Tuesday, as was a UVA basketball game.

“This is a message any leader hopes never to have to send, and I am devastated that this violence has visited the University of Virginia,” Ryan wrote in an open letter shared on social media. “This is a traumatic incident for everyone in our community.”

The Bureau of Alcohol, Tobacco, Firearms and Explosives said agents were assisting in the investigation. Gov. Glenn Youngkin said state police were coordinating with local authorities, and he and his wife, Suzanne, were "praying for the UVA community."

As the campus-wide lockdown lifted Monday, students, faculty and community members gathered to remember the dead and reflect on the tragedy.

Students in fraternity and sorority houses near the parking garage where the shooting occurred spent the afternoon crafting and displaying banners with messages including “UVA Strong” and the names and numbers of the players who died.

The signs were meant to give the campus community something to rally around, Luke Stone, a 21-year-old management and marketing major, said as he stood in front of a “Cville Strong” banner, reflecting solidarity in Charlottesville, Va.

Just after sunset, more than a hundred people attended a service at St. Paul’s Memorial Church on campus where participants prayed for the victims, the survivors and “for all whose lives are forever changed and broken by the scourge of gun violence.”

Rev. William Peyton said the church serves not only the student body, but many in the surrounding Charlottesville community.

“I hope that we provided a place of comfort and safety for those who need it,” Peyton said. “That's why we opened the doors.”

As night fell, hundreds more students slowly and quietly filled the university’s south lawn for a candlelight vigil. Mourners sat in silent reflection for nearly an hour, embraced and raised their candles and cell phone flashlights in unison before the crowd began to disperse.

Students are working with school officials to plan a university-wide. Classes will be canceled again Tuesday to “give our students the opportunity to reflect, mourn and gather with each other,” President Jim Ryan and Provost Ian Baucom said in a statement.

Students huddled together, waiting for news

Rachel Mulvaney, 18, a first-year student, had locked down in her dorm room. She said she first heard about the shooting when her mother called to make sure she was safe. A short time later she saw the school's alert that a shooter was on campus.

"I was terrified, it honestly didn’t hit me this could be real at first," she told USA TODAY in an email. "I had a hard time wrapping my mind around it and processing."

Students checked on one another to make sure friends and loved ones were safe, Mulvaney said.

"There is a heavy atmosphere of mourning," Mulvaney said. "I’m praying for the victims’ families and the UVA football team. I’m worried about the mental health of students. How will we recover? What will moving forward look like? Confused and scared."

Ellis Givens, a second-year student at UVA, lives across the street from campus, where traffic remained unusually light even after the lockdown was lifted. Givens lamented that crime seems to be increasing in Charlottesville.

“You definitely feel like you’re in a bubble while you’re on campus as a student here compared to Charlottesville as a whole," Givens said. "And that bubble has been popped now that something happened here.”

Luke, 21, a fourth-year student majoring in foreign affairs, biology and pre-med, was locked down at his girlfriend’s house with several other students "studying and just staying put." They listened to the police scanner for updates from the scene, which was less than a mile away.

"People have been locked down in libraries all night. Everyone (is) definitely shaken up," Luke, who preferred that his last name be withheld for privacy reasons, told USA TODAY in an email. "We are in deep prayer for the victims and for their families right now."

Wayne Taulapapa, a running back who played the last three seasons at Virginia before transferring to the University of Washington in the spring, was a teammate of the three victims and was on the 2018 team with Jones, though neither played that year.

“Can’t put into words the physical and mental pain that comes with losing not just teammates, but brothers,” Taulapapa tweeted. “You were never just football players, but rather examples of great and honorable young men.”

Perry played in the Cavaliers' loss to the Pittsburgh Panthers on Saturday and made two tackles. He had seven tackles on the season. Recruiting analyst Larry Blustein said he was “devastated” by the news of Perry's death.

“D’Sean was the ultimate student/athlete who never had an enemy,” Blustein wrote in a text. “While several schools didn’t take notice of what he brought to the table as an athlete, the University of Virginia understood what he was all about – on and off the playing field. ... This is a great loss."

American studies professor Jack Hamilton, who had Chandler and Davis in his class, tweeted about being "stunned and devastated'' by the events. He also noted that while standout players typically surround themselves with fellow athletes, Davis "seemed to go out of his way to make friends with non-athletes.”

A photo of Jones tweeted by UVA police appears on virginiasports.com, where he was listed on the UVA football team roster in 2018. His profile says he was then a 5-foot-9, 195-pound first-year running back from Petersburg, Virginia, who did not appear in any games. It adds that he graduated from Petersburg High School after spending three years at Varina High School, where he was named Student of the Year as a freshman and sophomore, according to the profile.

A photo of Jones tweeted by UVA police appears on virginiasports.com, where he was listed on the UVA football team roster in 2018. His profile says he was then a 5-foot-9, 195-pound first-year running back from Petersburg, Virginia, who did not appear in any games. It adds that he graduated from Petersburg High School after spending three years at Varina High School, where he was named Student of the Year as a freshman and sophomore, according to the profile.

Longo said Jones had come to the attention of his department in September after someone reported that Jones made a comment about having a gun, but no one reported actually seeing a weapon.

Longo also said officials learned about a previous incident outside Charlottesville involving Jones and a weapons violation, but said it wasn't reported to the university as it should have been.

Clara Grimmelbein, a first-year student majoring in computer science, said the past day has been "extremely terrifying.'' She accused the university of failing to properly respond to signs Jones might be a danger to others, including the reported comment about the gun.

"When Student Affairs were notified, they simply did the bare minimum instead of handling it like a real threat,'' said Grimmelbein, 18. "It breaks my heart to see the lives of three innocent young men being stolen because reports were not taken seriously.''

More about the University of Virginia

The university sits on 2,000 acres in Charlottesville, about 115 miles southwest of Washington and 70 miles west of the state capital, Richmond. The school was founded in 1819 by Thomas Jefferson, whose Monticello estate sits a couple of miles off campus, and is regularly ranked among the nation's top public universities. The UVA men's basketball team won the 2019 NCAA Tournament.