Why did eastern Japan shake after the Mie-oki earthquake?

Home   News Why did eastern Japan shake after the Mie-oki earthquake?
ABH

Why did eastern Japan shake after the Mie-oki earthquake?

Why did eastern Japan shake after the Mie-oki earthquake? : At around 5:09 pm on the 14th, there was an earthquake with a seismic intensity of 4 in Fukushima and Ibaraki prefectures, and a seismic intensity of 3 in a wide area of ​​the Kanto region. According to the Japan Meteorological Agency, the epicenter was off the southeast coast of Mie Prefecture, with an epicenter depth of about 350 kilometers and an estimated magnitude of 6.1. 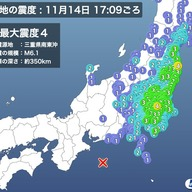 Why was it shaken in eastern Japan, which is far from the epicenter? The reason for this is that a phenomenon called an "abnormal seismic zone" occurred. According to Naoshi Hirata, chairman of the government's earthquake research committee, the mechanism is as follows. Near the epicenter, the Philippine Sea plate is subducting under the land plate, and the Pacific plate is further subducting under it. The quake's epicenter was so deep that it is believed to have occurred inside the Pacific plate.

Seismic waves tend to propagate through plates, but tend to be attenuated elsewhere. The Pacific plate becomes shallower toward the east near Honshu, and seismic waves are more likely to be transmitted to the land plate that is in contact with the Pacific plate. For this reason, it is believed that eastern Japan was shaken more strongly than the Chubu region, which is closer to the epicenter.

Earthquakes with abnormal seismic regions have occurred in the past. In July 2019, there was a M6.6 earthquake at a depth of about 390 km off the southeast coast of Mie Prefecture, and a seismic intensity of 4 was observed in Miyagi Prefecture. An M8-9 Nankai Trough earthquake is expected to occur at the boundary between the Philippine Sea plate and the continental plate in the sea area from Tokai to Hyuga-nada. And there is no direct relationship.

Hirata says, "Earthquakes in abnormal seismic zones occur occasionally. Generally, earthquakes that occur at great depths have few aftershocks, but in rare cases, earthquakes of the same scale can occur in succession. We should be careful that the tremors will continue to be strong." (Japanese original by Tomohiro Ikeda, City News Department)