Everton vs Chelsea : Jorginho penalty the difference in slog - DSN

Everton vs Chelsea : Jorginho penalty the difference in slog - DSN

Everton vs Chelsea : Jorginho penalty the difference in slog - DSN :- Jorginho scored the lone goal of Chelsea’s 1-0 win over old pal Frank Lampard and Everton on Saturday at Goodison Park.

The Italian rolled his penalty home after Ben Chilwell won the spot kick, and Thomas Tuchel’s men then settled into a plan to hold onto a lead and counter attack. 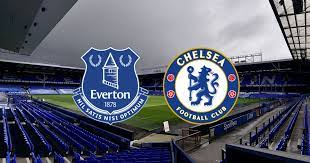 That nearly backfired but Everton’s absent Dominic Calvert-Lewin and Salomon Rondon combined with Richarlison’s exit to leave the Toffees without a real finisher.

Raheem Sterling and Kalidou Koulibaly were both strong on debut for Chelsea, while Everton’s star was also a debutant in Dwight McNeil.

What we learned from Everton vs Chelsea

Everton was fortunate to avoid conceding a penalty when Raheem Sterling appeared to be wrapped up in the box but was instead whistled for hunching over the ball once prone.

That was not the case in first-half stoppage time when Abdoulaye Doucoure caught hold of Ben Chilwell on Kalidou Koulibaly’s entry pass into the 18. Jorginho stepped to the spot and rolled a spot kick inside the post to give Chelsea a richly-deserved first-half lead.

Jordan Pickford couldn’t save an errant pass that crossed the back line but the assistant referee did not spot it and Kai Havertz instead grabbed the loose ball and was only stopped from a shot toward goal by Ben Godfrey’s hard sliding challenge. But Godfrey came off very worse for wear as a stretcher was immediately requested and Mason Holgate, who played well enough, was put into the game. A Toffees side without depth will not be in good shape without Godfrey for a long period of time.

USMNT winger Christian Pulisic arrived in the 65th minute for Mason Mount. He did not see much of the ball in the first dozen or so minutes of his shift, with Everton looking for an equalizer. Not much = Two touches between the 65th and 79th minutes.

Thomas Tuchel’s Chelsea was lively and held the ball to start but oddly enough seemed content with a 1-0 lead for much of the remaining time. The introductions of Marc Cucurella, Christian Pulisic, and Ruben Loftus-Cheek opened some doors. Unfortunately for Chelsea, the Blues not only ceded a lot of the ball to their hosts but almost invited them into the final third.

Stars of the show

Raheem Sterling: Petered out down the stretch but was the man of the first half. He should’ve won a penalty and could’ve scored or assisted on a number of other occasions.

Kalidou Koulibaly: Came off injured after 75 minutes but otherwise looked the part of a star center back. No moment spoke louder than a first-half intervention on Anthony Gordon to keep the game scoreless.

Cesar Azpilicueta: Chelsea hailed his resigning as the renewal of terms for “Mr. Chelsea.” He barely put a foot wrong at the back of a 3-4-3.

Dwight McNeil: Got an hour on debut and the ex-Burnley man was stuck into four tackles and registered a key pass. Now he just needs someone who can run onto those key passes.

Vitaliy Mykolenko: Brilliant blocks in each half to deny Sterling and Co., racking up three clearances, a blocked shot, two interceptions, and two tackles.

Everton will host Villa at 7:30am ET Saturday as Lampard vs Gerrard takes on new meaning, while Chelsea renews acquaintances with another old pal when Antonio Conte’s Tottenham visits Stamford Bridge at 11:30am ET Aug. 14.