Davis Cup hero Thompson happy for any role : Jordan Thompson's day began by being dropped as Australia's Davis Cup singles opener - but ended with him being feted as the dazzling doubles stand-in who helped blast his country into the final.

No wonder the hirsute Sydneysider's can-do attitude, aptitude and versatility has made him captain Lleyton Hewitt's 'Mr Fixit' in Spain this week, as he's jumped from being a battling solo star to unlikely doubles hero. 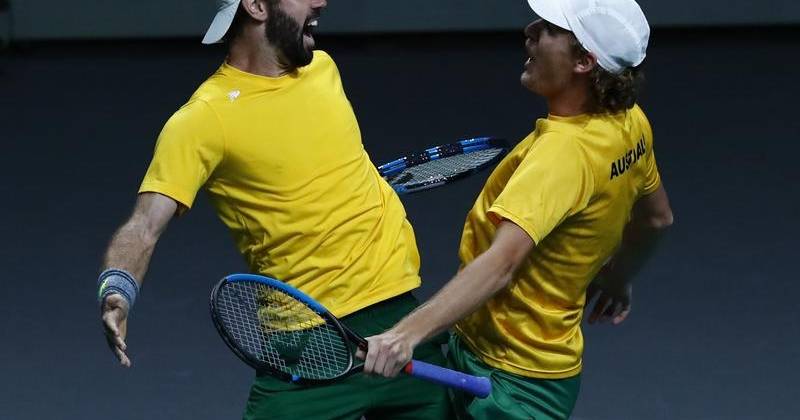 But the question now is: what role will 'Thommo' have in Sunday's (Monday AEDT) showdown against either Canada or Italy, as Australia stand on the verge of becoming the men's world team tennis champions for the first time in 19 years?

Surely, it would be unthinkable for him not to have a key role in the final after his heroics this week, starting when Hewitt gauged Thanasi Kokkinakis wasn't quite sharp enough for the opening singles against the Netherlands in Tuesday's quarter-final and plumped for Thompson instead.

The dependable 28-year-old vindicated that decision by earning a crucial win, but it wasn't enough to land him the singles job in Friday's semi-final as Kokkinakis's extra firepower earned him the chance to take on - but eventually lose to - Croatia's Borna Coric.

Instead, Hewitt had other plans for Thompson, bringing him in to replace the injured Matt Ebden in what turned out to be the doubles decider - and watching him bond brilliantly with Max Purcell as they edged the Olympic champions Mate Pavic and Nikola Mektic in three sets.

Asked if he'd been disappointed to be dropped from the singles, Thompson sounded almost affronted.

"Whatever role the team needs me in, I'll do that role," he said.

"I still got to wear the green and gold and alongside Maxie in a do-or-die doubles match. To put us in the final, that feeling, I can't describe it. Anything the team needs me for, I'll stick my hand up."

He could miss out, though. If Ebden was to be fit again, he'd surely link up with his Wimbledon-winning partner Purcell, while Hewitt may also still prefer to give Kokkinakis another chance in the singles as back-up to key man Alex de Minaur.

That would leave Thompson being a bench cheerleader - but this perfect team man would doubtless throw himself into that with gusto too.

Hewitt clearly has more tricky selection decisions ahead, whoever his side faces.

"Italy are undermanned (without their star duo Matteo Berrettini and Jannik Sinner) ... they play with a lot of passion and fight out there, and have an experienced doubles pair (Simone Bolelli and Fabio Fognini) that can get the job done under pressure," he said.

"Canada, they have just got firepower. Two very quality singles players (Felix Auger-Aliassime and Denis Shapovalov), obviously. Doubles-wise, we lost to them a couple ofyears ago in the quarter-finals, the two guys that got them through last night (Shapovalov and Vasek Pospisil)."

One certain rubber if the Canadians get there will be Auger-Aliassime against de Minaur, with the Australian having to face the biggest threat yet to his fabulous recent Davis Cup run.

Hewitt, who admits he relies heavily on a player cut from the same hardy cloth as him, shrugged: "The way Alex has played this year, he really deserves to be playing in a final."